Transforming our system for education...

Plans for Guernsey’s new post-16 campus, which will create an adult, life-long learning environment for all students, have now been approved.

The plans will deliver 15,000m2 of internal education and community spaces, including 1,700m2 of inside sporting and recreational facilities.

You can view the full site plans here

Significant consideration has been given to ensure that the campus fits in to its natural and physical surroundings, with minimal impact. A key ethos in the design process has been to deliver a site that is as environmentally neutral as possible, with lots of emphasis on preserving and enhancing green and open spaces. As part of that, a well-known mature Sweet Chestnut tree, which featured in the former St Peter Port school emblem, will be retained as part of the plan as a fitting nod to the site’s legacy.

The construction has also been planned in such a way that the intention is for Princess Royal Centre for Performing Arts to remain open throughout the development of the site. 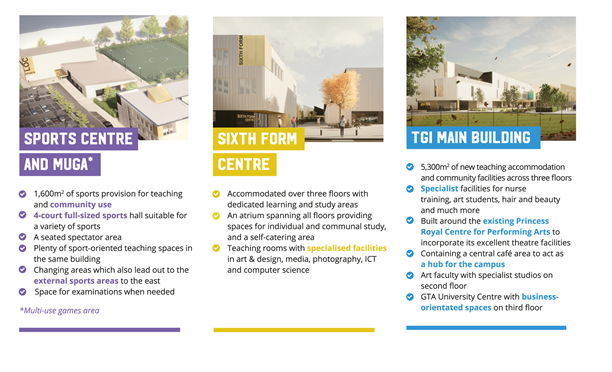 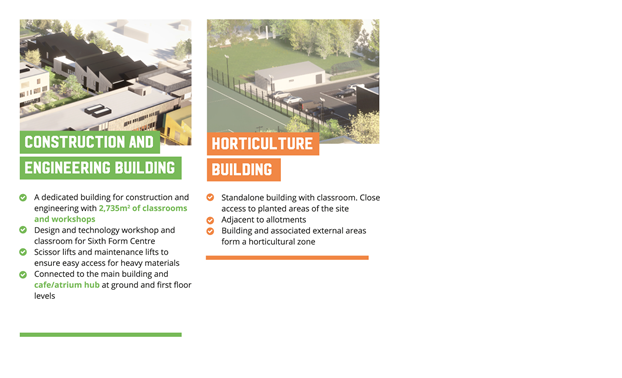 All of these images are architectural drawings, which could be subject to change

"The new campus will be a centre of ambition and aspiration for all learners progressing from our three 11-16 schools. Students will graduate to the campus, irrespective of their learning pathway, to join a mature, adult learning environment which will prepare them for their next steps into education or the world of work.

"We hope you enjoy this visual summary of the development, which includes details of the design of the campus, specifics of the site plans, and providing an overview of the exciting and fantastic facilities that will be in place for the benefit of the whole island as part of our commitment to investing in our young people and lifelong learning.

"We’ve also included in this summary details that we hope will reassure anyone concerned, especially neighbours who we want to work with, about the impact of the development on the surrounding area, specifically in terms of traffic. We have been very reassured by a thorough independent traffic assessment, which has recently been undertaken. Further details of this and measures to minimise the impact of the campus and enhance the natural environment can be found on the back page.

"Our Committee is incredibly excited about the development of the new post-16 campus and is committed to keeping the community informed on every step of the journey between now and delivery of the fully operational site in September 2025." 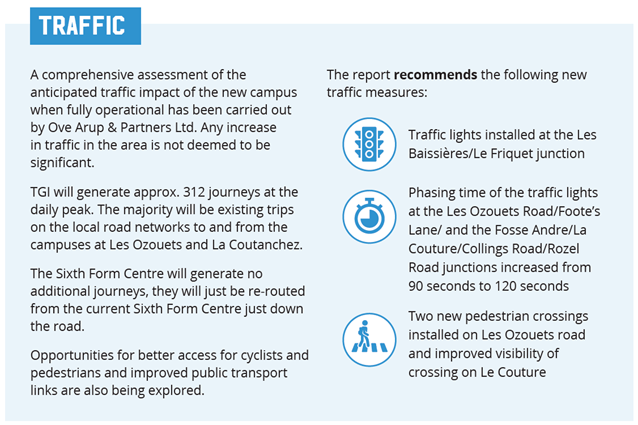 A new model for delivering Secondary and Post-16 education in Guernsey is due to be in place by September 2025, having been approved by States of Deliberation in September 2021. 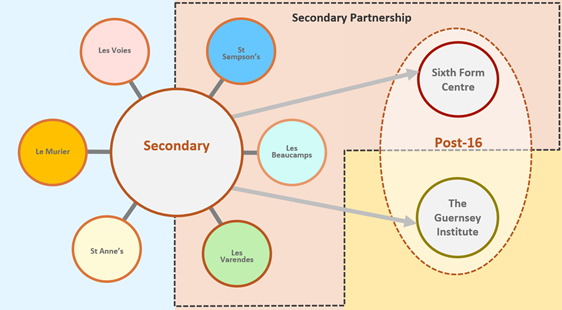 The three 11-16 schools and the Sixth Form Centre make up the Secondary School Partnership.

TGI will bring together The Guernsey College of Further Education, the Institute of Health and Social Care Studies and the GTA University Centre. When the new post-16 campus is constructed it will bring together these three institutions in one location.

The Princess Royal Centre for Performing Arts will remain on Les Ozouets as an integral part of the new campus.

TGI and the Sixth Form Centre will still remain operationally independent, but will have close links to harness the potential opportunities the co-location brings. 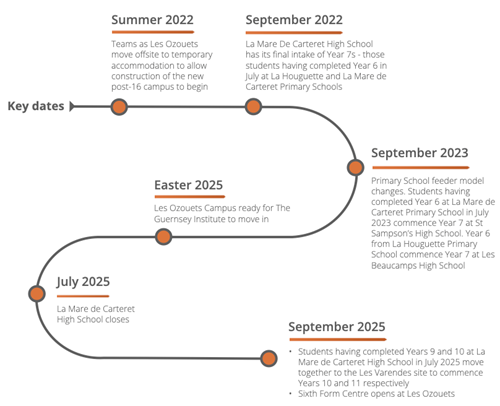 The updated feeder school system will come into effect in September 2023.

The map below indicates which secondary school current Year 6 students will attend. 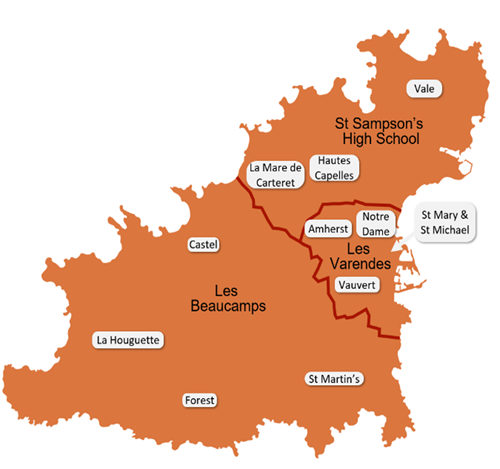 When the new model becomes fully operational in September 2025, students currently at La Mare de Carteret High will all move together to the Les Varendes site.

The Sixth Form Centre will remain at Les Varendes until July 2025.

However, under the revised timeline it is expected that The Guernsey Institute staff and students will be able to move into its new purpose-built facilities as soon as it is practical for them to do so in 2025, which could be early in the year or during the Easter holidays. This will only be done where it is appropriate for learners, taking into consideration their course requirements.